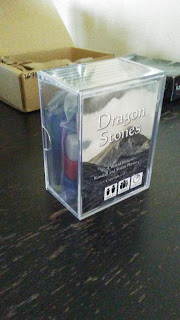 Dragon Stones is a racing/obstacle game with a chess-like twist. Two dragons are having it out with each other and the winner takes all!

Two neighboring dragons have had it with each other, and so has the local wizard! He has arranged for a contest between the two dragons, the winner claims the icy land of Solation, while the loser must find a new mountain top to terrorize!

This contest will be no picnic. It is so cold that entire clouds have been known to drop out of the sky! Also, beware of the ghosts who haunt the land and will drive even a dragon crazy if it becomes surrounded. 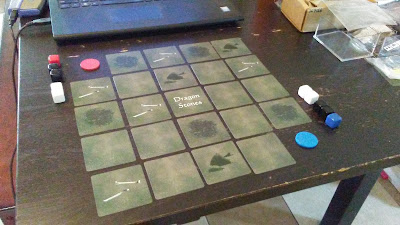 
The red dragon always starts, and so will always win, unless the blue dragon is able to steal a tempo. This can be done in many ways using the ghost and stone pieces. Ghosts are considered less aggressive because they can be moved by your opponent before they move their dragon. Stones are considered more aggressive because they cannot be moved, and become permanent fixtures in the landscape. The blue dragon's entire strategy is bent on gaining that tempo, and the red dragon's entire strategy should be to keep from losing the starting tempo, or gaining an additional tempo to solidify his or her lead.

The two most common openings are the "Banshee" opening, which is done by placing a ghost or stone slightly to your opponent's side of the center tile (C4 and D3 for red). Or the "Seculded Lair" opening, which is done by placing a stone immediately next to your own lair as a ward against your opponent (A2 and B1 for red), forcing them to approach from only one side. However, per the dragon and stone placment rules you cannot then place a stone on the other tile because your opponent would not have a legal path to your lair. (All of these strategies work for blue as well, just reverse the coordinates.)

The most agressive opening is the "Forward Stone" which is the same as the Banshee opening, but with a stone. This draws a line early in the game and forces your opponent to one side of the board, but can bite you in the end game when your own dragon approaches that side! This opening has consistently led to the most pieces ending up on the board of any opening we have documented thus far.

There are two basic strategies to win a tempo from your oponent. 1- Create a flank with the ghosts on the board, or 2- force your opponent to waste time using stone placement.

Let's look at the ghost strategies first. Placing a ghost near your opponent early is the key to getting a flank. If you can use their own ghosts against them, that is even better! A common way to get a flank is by holding on to one of your ghosts until your opponent ends their turn next to a ghost already on the board. Then instead of moving a ghost, you can place a new ghost from your stock to create the flank!

The key to winning a tempo by stone placement is timing. Once your opponent commits to a certain side of the board, you can place stones on two consecutive turns and force your opponent to backtrack across the board to go around them. This is much easier if they have already placed a stone on the board, because you have more pieces to work with. The most common time to employ this technique is as their dragon approaches your lair.

Let's look at an example. Let's say the blue dragon is approaching the red lair from A5. After he moves to A4, red places a stone on B3. Confused, on his next turn blue moves to A3. Red then plays a stone on A2, which forces blue to backtrack and lose at least one tempo in the process.